Leaders of internally displaced peoples of Marawi temporarily located in 15 evacuation sites in Iligan city converged on August 2, 2017 in a one-day leadership workshop to harness their capacities in managing co-evacuees in relocation and house-based centers.

After more than two months of dislocation due to armed-conflict between government forces and the local extremists groups, these IDPs learned to manage their lives despite evident hardship and congestion in the relocation sites and tried to be resilient against prevailing situation.

Renefe Padilla, project coordinator of Ecoweb Inc. in the implementation of community or survivor-led response (C/SLR) in disaster management, discussed the fundamental concepts, principles, and values of leadership.

They also reviewed the basic approaches and mechanisms of C/SLR to refresh their ideation on the systems adopted to secure inclusive participation of internally displaced peoples in accessing or managing resources and humanitarian intervention.

All of these leaders organized their respective self-help group as part of participatory management in community/survivor-led response.

Their overarching concern, after more than two months in the evacuation centers, is the increasing demand to have more access of relief goods, psychosocial and medical assistance, and other humanitarian supports while the government and its partners are developing Marawi city’s reconstruction and rehabilitation plan through Task Force Bangon Marawi.

Like their traditional and religious leaders, they also wanted to be represented in the structures aiming to reconstruct and rehabilitate Marawi– their original place of abode.

In a workshop, IDP leaders demonstrated through experiential reflections their ability to recognize problems, issues, and challenges; capacity to find resolution on emerging IDP problems; creativity in finding alternative access for support; and, pro-actively co-lead in the formulation of policies and regulations for camp and house-based evacuees management.

They also prided in taking part in systematizing the distribution of roles and tasks for cooperation; improved their management of disorderly situation during relief distribution; developed collaboration with barangay officials and various humanitarian groups; have inspired in increasing spaces for communication through dialogues and conversations to resolve concerns; and, ensure that all humanitarian-related information trickle down to all evacuees within their respective sites. 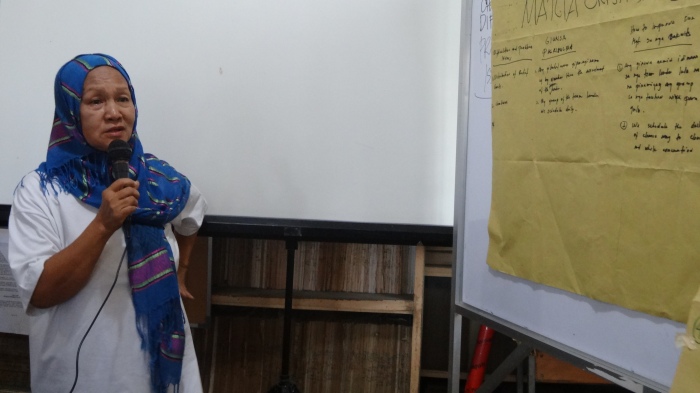 There are 48 participants of this workshop.

Ecoweb Inc. initiated this activity in partnership with Christian Aid.

I am for Accountable Local Governance

I am for Accountable Local Governance